There just isn’t enough time in the day for 80 Empire to talk, make, and listen to music.

The multi platinum Italian brothers Lucas (producer, engineer, musician) and Adrian (singer/songwriter, rapper) from Niagara on the Lake, Canada, have burst on the scene in the last 5 years as eclectic production chameleons crafting big sounds for the likes of KXNG Crooked, Conway the Machine, Benny the Butcher, Fred the Godson, Swifty McVay of D12, Obie Trice, Bone Crusher, Masta Ace, DMC, Jadakiss, and many more.

Outside of Hip Hop they’ve worked with the legendary Commodores, scored the theme song to the Real Housewives of Miami, and have even executively produced some short films that have made it to various international film festivals.

Their production is fiercely loyal to the sounds of their youth yet possesses ambitious new schoolism. With influences as diverse as Jazz, Soul, Opera, and Blues, they are truly sonic journeymen whose creativity often start in one genre and morphs into another by the end of the record.

Their latest video Legacy featuring Conway The Machine and Balistic Man takes a different route showing young Canadian Hockey players and the current journey they are on to achieve their goals. Directed by Fatty Soprano and shot in Toronto, the concept was inspired from the film Soul On Ice starring Kwame Mason.

“I called up Kwame because my eldest daughter was doing a speech in school about racism in hockey, Kwame was mentioned in an article she read, it spawned the idea of reconnecting with Kwame and the rest is history” says 80 Empire.

The track serves as the title cut off their LP which was released Jan 1st 2021 and produced and mixed entirely by themselves. Check out the visual on Youtube and the album on your preferred digital streaming provider. 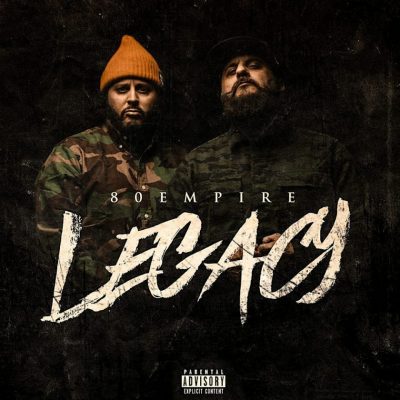