After recently celebrating the 25th Anniversary of their landmark debut, Enta da Stage, Black Moon’s evolution has come full circle as they take it back to the essence with their new fully formed reunion album, Rise Of Da Moon, which finds the group’s original members (Buckshot & 5 ft) all in tow; with Da Beatminerz handling all of the production.

Black Moon released the visual for their lead-single, “Creep Wit Me,” via an exclusive premiere with Complex. “Creep Wit Me” is now available at all DSP’s.

“If you only knew how good it feels to be doing this for the love. Much respect to hip-hop for having Black Moon in the cypher. It’s been a long time” an appreciative Buckshot commented to Complex.

“It was so dope working with my crew on this album. Unlike a lot of albums today, we recorded the album together in the same studio” Evil Dee commented to Complex. “Mr. Walt & I came with our Beatminerz sound (heavy bass and drums) representing that boom bap. Buck & 5 came with the ill rhymes. Mixing the album was so dope. We wanted to bring back it back to the 90’s with our analog/digital mixing process. Rise Of Da Moon represents Black Moon’s legacy to the fullest.”

“Working with my Black Moon brothers is always an ill experience, we never know what the outcome is going to be; just being together and giving it our all is where the adrenaline is for me” 5 ft stated. “On Rise Of Da Moon we created a new version of ourselves, a more mature version; but with the same energy. Buck and I have a lot more back and forth on this album and you know Evil Dee and Mr. Walt came with the heat.”

Black Moon’s Rise Of Da Moon will be released this summer and includes appearances from Smif N Wessun, Rock (of Heltah Skeltah) and Method Man. 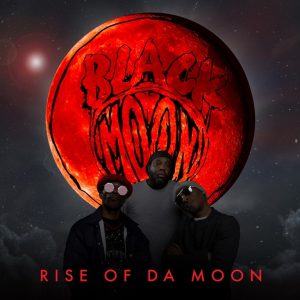