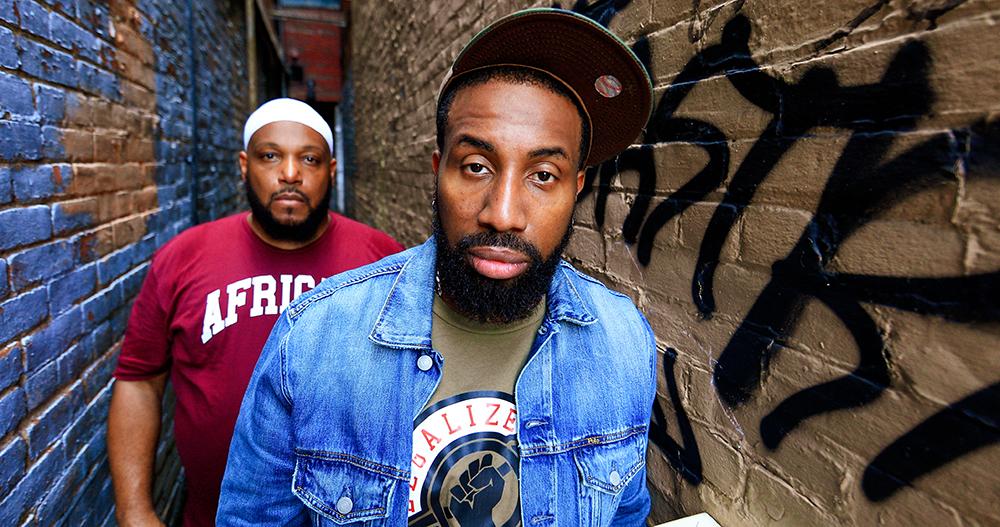 “Instead of following trends or best practices, [Grxwn Fxlks] believe in creating products that the mainstream will find “edgy,” but which niche audiences will relate to in a deep way.” –Forbes Magazine

The debut album from Grxwn Fxlks is the result of the group’s relentless and independent pursuit of perfection. The Pittsburgh-based emcee/producer super-duo (Masai Turner & Akil Esoon) set-up shop in New York, Los Angeles, and Atlanta to collaborate with the greats, utilize world-renowned facilities, and build strong business partnerships while producing the album. Their mission was to make music that creates a lasting bond with Hip-Hop’s most disenfranchised demographic – adults.

While conceptualizing, Masai and Akil engaged in mature conversations about “real life” that were a far cry from the all too repetitive subject matter found in the culture’s mainstream. “The dialogue organically translated into practical song ideas and lyrics” Masai recalls.

“We were confident there was a whole tribe of people around the world having these same conversations about topics other than violence, bad jewelry, misogyny, and wasting money… so we decided to make them a soundtrack.” The aforementioned materialized in the form of an eargasmic eight-song collection of densely layered production and articulate wordsmithing.

June 17th’s Volume I: Independent is a confluence of positive vibes, social awareness, cultural pride, and street wisdom. The magnificent turntable wizardry of 2-time Grammy Award-Winner DJ Jazzy Jeff is featured on the eponymous track “Grxwn Fxlks”. The uber soulful, 3-time Grammy Award-Nominee Raheem DeVaughn assists with one of the album’s standouts “Magic” — a love letter to the magical qualities every good woman should be appreciated for.

Veteran Bronx emcee, activist, and author Mysonne trades rhymes about the ills of street life with Masai on “Let’s Talk About It” over a healthy dose of boom-bap provided by Akil Esoon. Rhymsayers Entertainment’s singer/songwriter Nikki Jean contributes her charming cameo stylings on the closing track “One”.

A debut, independent album with the heavy hitters above is a testament to the group’s relationship-based approach to everything they do. “It was mission critical for us to shake hands, make eye contact, push buttons, and twist knobs in the same rooms as the people we were creating with” Esoon claims. “There are some things that just can’t be accomplished over email…you’ll hear that difference in this album.”

These in-person sessions at LA’s Paramount, Atlanta’s Patchwerks, New York’s DITC, and Pittsburgh’s ID Labs recording studios (to name a few) were filmed and edited into a 75-minute documentary that will premiere on July 28thand then go on to travel the film festival circuit.

Independent: a Hiphopumentary is an immersive fly-on-the-wall experience that grants unusual access to this particularly reclusive group that often has months between social media posts.

On the business end of the music spectrum, Grxwn Fxlks’ releases will be distributed exclusively by The Orchard (a fully-owned subsidiary of Sony Music) — widely recognized as the leading distributor of independent artists/labels. This partnership allows the group to retain 100% ownership and creative control while leveraging the power of the distributor’s marketing and promotion resources.

Grxwn Fxlks’ first single “Celebrate” has reached over 1 million streams since its release. The majority of those streams came from the 33–54-year old demographic – another anomaly for a Hip-Hop outfit releasing their first song. Masai’s lyrics lead listeners to appreciate the small things and to be grateful for the life they have. “Check cleared, bills paid, Celebrate”, Turner encourages.

This humanistic, eye-leveled approach was an intentional litmus test. Thousands of comments, shares, and purchases later, Grxwn Fxlks has their proof of concept. They also have a series of concert dates this summer, a college tour in the fall, and Volume II’s release in the winter to look forward to.

Success in Hip-Hop may typically be a young man’s game, but all recent signs point to it being a Grxwn Fxlks’ reality.