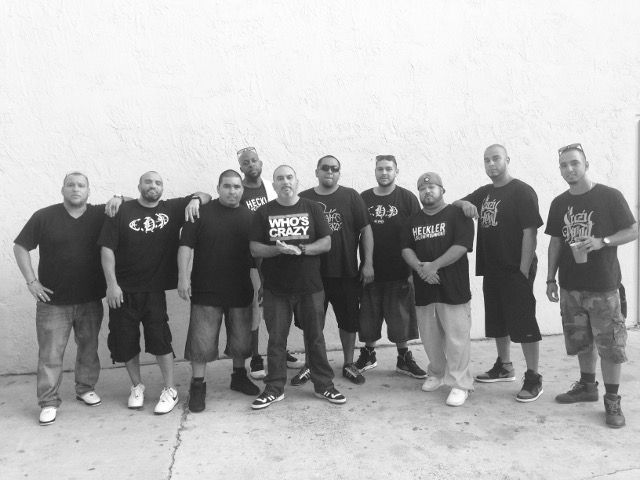 DJ EFN is the mad genius behind Crazy Hood Productions, a bastion of Miami hip hop since the early 1990’s. He released his first Crazy Hood mixtape in 1993, and has since released more than forty more, highlighting legends from Outkast, Wu-Tang Clan, Capone-N-Noreaga and Sean Paul. A respected radio promoter and label exec, he has always been an advocate for underground hip hop artists, and especially those coming out of Miami. Still considered to be a major influencer on the world hip hop scene, MRCNN was excited to have the opportunity to find out what makes this man tick, and where it all goes from here.

Peace DJEFN, thanks for taking time out for the interview, how are you?

I am well, thanks. And thanks for helping me get the word out on my project.

Where are you originally from, where is home now?

I was born in Los Angeles, California and grew up in Miami, Florida. Miami is home but I have family in LA so I regularly travel back & forth. So I am a Miami boy but I am still connected to my west coast roots. My parents are Cuban so I also have those strong Cuban roots as well.

Can you tell us about your first hip hop experience?

Not sure I can pin point my first encounter or experience with hip hop because hip hop music slowly crept into my life. I grew up loving all music and hip hop was always in the mix but it wasn’t until I was in junior high that I discovered hip hop as a culture. Once I realized hip hop was a culture in its infancy I knew I wanted to get in on the ground level. I was already living the lifestyle but I wanted to be more proactive in the development of our local scene.

You produce and dj, what year did you make your first mixtape? How many made to date?

Before I could afford turntables I would make ‘Pause Tapes’ which was the bootleg way of making mixes without turntables using two tape decks. I made my first ‘Pause Tapes’ in the late 80’s early 90’s. My first official mixtape using turntables was released in the summer of 1993. I am not exactly sure how many mixtapes to date I have made or been a part of but its probably well into the hundreds. My official series reached about 40 releases.

That is a difficult question for any DJ. I can’t say I have just one & its hard to even name ten! Some of my favorites are NWA “Staight outta Compton”, Common “Soul by the Pound Remix”,Redman “Tonights Da Night”,Run DMC “Down with the King”,Public Enemy “Fight The Power”,Ice Cube “Summer Vacation”,Pete Rock & CL Smooth “TROY”, Naughty by Nature “Uptown Anthem”, Outkast “Southernplayalisticadillacmuzi”, Mother Superia “Rock bottom” & I can just keep going! LOL

What year was Crazy Hood Productions established? Is it a record label?

Crazy Hood Productions was established in the summer of 1993 and has evolved to be many things. I like calling it a multi media company. We are an indie label, a marketing company, a management company (We manage ¡Mayday!, Wrekonize, Garcia, Heckler, and producers Big Drain, and BeatsnDahood), an event coordinator, and even a small clothing line. In recent years we have expanded to do film with our sister company; Crazy Hood Film Academy. We currently have a documentary film airing on Revolt TV and two more in the works that will also air on Revolt TV in the next few months.

The series is called ‘Coming Home’ and its a film series where we explore countries through their hip hop scene. The first film explores Cuba, the next two are Peru and Haiti. We also have a short film called “Avaricious” which is doing the festival rounds right now and has already won best Florida Short at the Key West Film Festival and was recently accepted at The Canne Film Festival’s Short film Corner.

Can independent artist send you music? If so, how should they go about that?

Yes they can and the best way would be to submit through our site Crazyhood.com contact page.

You have several releases out at the moment, can you drop some names, whats next for DJEFN?

I have steadily been releasing tracks off my upcoming “Another Time” project. A couple of them are “If U Run” featuring Crooked I aka Kxng Crooked, Webbz and Killer Mike, “Warrior” featuring David Banner, Sizzla, NORE and Jon Connor and recently I released “Who’s Crazy?” featuring DJ Premier, Troy Ave, Stalley and Scarface.

Any tours or shows coming up?

Other then my album release party on March 5th I really don’t have anything planned. This project was something I just wanted to do just to do. It really wasn’t something where I was trying to make a serious play for touring and putting myself out there like that. the artist I manage are more of a priority when it comes to tours and opportunities, don’t get me wrong, I am not against doing certain things so I guess I would just evaluate opportunities as they come. This really was a passion project that I wanted to create without the pressure of having to cater to a certain audience or live up to certain expectations.

Shout out to my entire Crazy Hood family, my ¡Mayday! family, my homie Nomadic Trackz who helped me put the project together and to everyone out there sharing, tweeting, posting and helping me get the word out. Shout to yall for reaching out! Thanks!