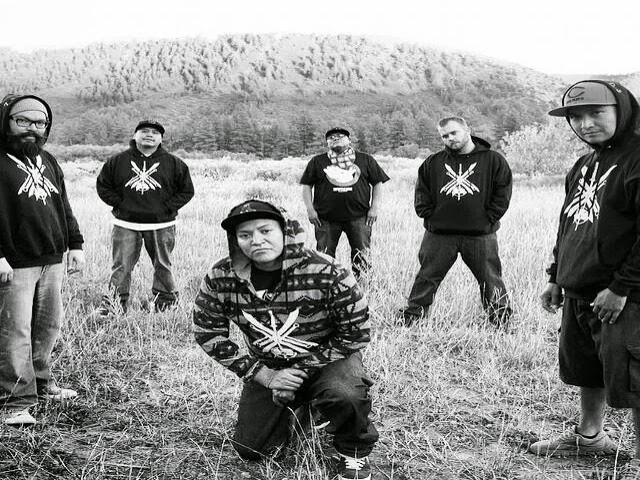 What can be said about Ill Methods? Hardcore native tongues in every sense of the word, nouns metaphors verbs raw truth absurd, two degrees beyond third.. what the game needs more of.. Had to kick it in rhyme cuz one thing I’m sure of… If you want Hip-hop sprinkled with C4, they take it back to the essence far beyond and more, Mighty rebels with a cause inclined to read the signs.. seven times seven minds armed with beats and lines..

Q. MRCPROMO: Peace, where is Ill Methods from?
A. ILLMETH: We hail from the sands of the Southwest in New Mexico, Colorado, and Oklahoma.

Q. MRCPROMO: How many members in the group and what are your names?
A. ILLMETH: There are 7 total members that include AngryMonk, 2nd Born Son, Ugli Boi Odditi, Phrase, Sac One, Merv, & Dead Penguin.

Q. MRCPROMO: How did the the group form and when?
A. ILLMETH: The group’s original members were AngryMonk, Phrase and Ugli Boi Odditi which came together through college and the hip hop culture in 2006, also through art classes and word of mouth of emceeing that eventually lead to recording tracks together. Merv was added as a DJ who eventually started emceeing after a couple of shows together. They cross paths with 2nd Born Son which they ask to join the crew.. because his style of raw lyrics fit perfect with the us. Dead Penguin was added after supporting the crew then later joined as engineer/ show dj, SacOne was asked as the final member from freestyle talents and his promotional efforts.. also through the Dezert Banditz (a New Mexico based hip hop crew) that supported us and completed the crew with the different styles and backgrounds. This has been a long journey of empty shows, road trip, broke bank accounts, but still had each others back and made sure we enjoyed ourselves in this hip hop culture.

Q. MRCPROMO: How did you get down with 4th Disciple? Are you signed to Wu Tang Manegement or Protect Ya Neck Records?
A. ILLMETH: We contacted 4th Disciple as soon as we knew we were going to release an album through Protect Ya Neck Digital. We are signed to PYN Records and Wu Tang Management is the larger entity of the label, so we would say we are part of both.

Q. MRCPROMO: Who produces most of your beats and who comes up with the concepts? Is it a collective thing?
A. ILLMETH: We have 4 producers in our group which include Angrymonk, 2nd Born Son, Ugli Boi Odditi, and Dead Penguin. 3 of 4 of us showcased our production along side some of the greats 4th Disciple, Domingo, and DJ Waxwork of Snowgoons.

Q. MRCPROMO: Do you write ryhmes to the beats first or vice versa? What is your method?
A. ILLMETH: Each member has his own fix in writing and delivery. In the end we never wrote an album together as one. It’s our style and our METHODS that makes us a whole. We bring them all together to paint one picture on one canvas.

Q. MRCPROMO: How many records have yall put out?
A. ILLMETH: “W-ILL” which is released under Protect Ya Neck Records/Wu Tang Management (2015), “7 Swords” EP which each member has their own solo songs (2014 ), “Heads And Methods” mixtape Mixed by Wu World Radio’s DJ Bless1ne (2014),”The Meateater Project V​.​1 by ill methods MRCPromotions “The Meat Eater Project Vol. 1”, “The Methods EP”, & “Ill Methods” self titled.

Q. MRCPROMO: Can you tell us a little bit about your new project Will? What are your expectations?
A. ILLMETH: The “W-iLL” project was our first official album release that was suppose to define our style and culture. We wanted to display our struggles, opinions and mind on the world and life. The album came out exactly how we wanted it to sound with perfect collaborations, concepts, and production. We are from a Native American reservation but live to be heard worldwide and that’s exactly what we sound like, pour style with a worldwide sound.

Q. MRCPROMO: Any tours or shows coming up?
A. ILLMETH: Our upcoming shows is a “W-iLL Festival in our hometown to display the “W-iLL” album as a whole for our fans.. followed by a Youth Event for Young Native Americans in the Phoenix area to reach out and speak the to youth through our talent and also a workshop. The “Wi-ill” festival will be followed by another show in the same area which is actually a tour called the Indie Boom Tour which we will be rocking in full support.

Q. MRCPROMO: Last words or shouts?
A. ILLMETH: Thanks to all fans who support us from family, friends and new listeners. Big S/O to PYN Records/Wu Tang Management and their support, Folded Arms Studio for the professional recording and mastering on the “W-iLL” album, The Venues/Promoters that allow us to rock shows.